Title:  Arizona's Junior U.S. senator since 2019; not elected but appointed by AZ Governor Doug Ducey to fill out the remainder of the late Senator John McCain's term. 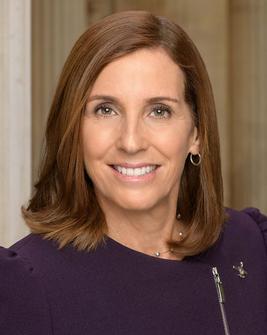 ​When Senator Martha McSally refused to answer CNN's Manu Raju's questions and labeled him a "liberal hack" back in January of this year, we cheered her on. It was long overdue for a member of Congress to finally call out a so-called objective journalist. Several conservative pundits and organizations celebrated this moment as well with a few even going so far as endorsing her re-election campaign.

However, what makes us different than the others is that we are not afraid to go against the grain and promote Sen. McSally's defeat in the upcoming Arizona U.S. Senate primary being held on August 4th. One moment of sticking it to the media does not warrant an endorsement and certainly the citizens of Arizona, conservatives in particular, can do much, much better than a governor-appointed senator with a lousy voting record.

Our mission at Conservative First is to not only identify and promote candidates whom we think best embodies conservative principles, but also to track their progress as conservatives once in elected office and hold them accountable when they stray from the principles they espoused to get elected.

Back in 2014, Conservative First endorsed retired Air Force Colonel Martha McSally for Arizona’s 2nd Congressional District seat in the hopes that conservatives in the district would find in Ms. McSally an advocate who could represent them. Unfortunately, after serving four years in the U.S. House of Representatives and over just one year in the Senate, Senator Martha McSally is not a proponent of conservatism.

In fact, not only has Sen. McSally failed to be a leader of conservative principles, she has quickly become a reliable vote for Senator Mitch McConnell and the establishment, certainly not what we expected when we endorsed her several years back.

While Rep. McSally has not amassed much of a voting record in Congress since her election, there is certainly enough of a record to establish a disturbing trend. Most of her missteps appear to center around her failure to curb the growth of the federal government. Unfortunately, the trend in the country right now is to expand the runaway rate of growth of the government and intrude its inevitable misery into our daily lives, ever-decreasing our individual liberty and freedom. As of now, Sen. McSally is contributing to that trend with little sign of slowing down.

Examples of her voting record since first being sworn into Congress include voting for continuing resolutions, voting against anti-DACA amendments, voting with former Speaker Paul Ryan to help bail out Puerto Rico over its debt crisis, voted to reauthorize No Child Left Behind, cast an “aye” vote several times to save the Export-Import Bank which is a classic example of crony capitalism, and voted against defunding Planned Parenthood. Finally, Rep. McSally voted again with Speaker Ryan on the $1.1 Trillion Year-End Omnibus Spending Bill in 2015 which we vehemently opposed here at Conservative First.

McSally's senate voting record has paralleled her time in the U.S. House. When it comes to the budget, spending, and our debt issues, Sen. McSally has voted to expand government and add to our outrageous $23 trillion and counting national debt. For example, when Senator Rand Paul offered an amendment on an omnibus spending bill appropriating money for the Commerce, Justice, Transportation, Housing and Urban Development, Agriculture, and Interior Departments that would have cut spending in this bill by two cents from every dollar spent in fiscal year 2020 from the amount appropriated for FY 2019, Sen. McSally unsurprisingly voted against it.

We certainly want the U.S. Senate to stay in the hands of the GOP but more so in order to keep it away from the radicals on the other side. At some point, conservatives must ask ourselves who it is we want in Congress representing us. Voting against the radical left is not enough. We must vote FOR someone and FOR principles and ideals. Unfortunately, voting for Sen. McSally would be more of the status quo that we the people have grown to dislike.

In 2018, then-Rep. Martha McSally lost her bid for the U.S. Senate and recent polling shows her trailing 2020 Democratic challenger Mark Kelly by 3-10% depending on the poll. It would be a major blow to the Republican Party's chances of holding onto the U.S. Senate if Sen. McSally is the nominee and loses in the fall. The fate our nation is at stake with the 2020 election and conservatives should support another candidate in the August 4th primary.

Senator McSally is at best a non-entity in the United States Senate. At worst, she represents the type of politician who has contributed to the American people’s cynicism. Martha McSally campaigned as a conservative and attracted the attention of supporters all across the country in 2014 and got elected. Four years later with the establishment firmly on her side, she lost a very winnable election. Should we risk control of the U.S. Senate with someone who is not conservative and could make Chuck Schumer the Senate Majority Leader?

We say definitely not.​

​HELP US DEFEAT ONE OF MITCH MCCONNELL'S RELIABLE ESTABLISHMENT SENATORS.