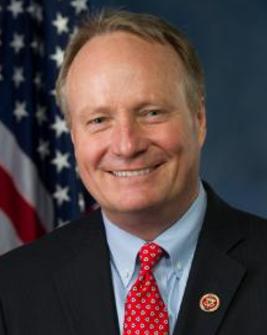 ​The state of Ohio is the focus of every presidential election in the United States primarily because it is the epitome of a “purple” state. Ohio is home to some of the most conservative members of the House of Representatives as well as the most progressive.

The 14th Congressional District is located in the very northeast corner of Ohio, and within this district is a mirror-image of the political diversity of the state.

Representative David Joyce is the Congressman from this district, and unfortunately, he does not represent the conservatives of this district with any great zeal. Consequently, his ineffectual relationship with conservatism lands him once again on Conservative First's 2022 Target List. Although Joyce has proved to be a far more reliable conservative than his predecessor, the citizens of that district deserve better and Conservative First is on the job to make that a reality.

One of the most concerning trends that Rep. Joyce has displayed so far in Congress is his voting record regarding agriculture subsidies. This trend would not be so surprising if Joyce represented one of the western districts in Ohio where the bulk of Ohio farms are located. However, the real concern is that the legislation that he voted for in 2013 and 2014 derailed any chance for significant food stamp reform. This inability to stand for limited government is a disturbing sign.

Another sign of concern is Joyce’s voting record on civil liberties. He voted against an amendment in both 2013 and 2014 that would have hindered the NSA’s ability to gather data of Americans without their consent or knowledge. This blatant breach of trust by the federal government is beyond any measure of restraint. Americans agree that part of the government’s role is to protect property, but this is evidence that those in power have lost the perspective on how best to do that.

Rep. David Joyce has not been in Congress for very long, but the only conclusion that can be gleaned from researching his record is that Joyce simply does not see the federal government as the threat to freedom that conservatives and libertarians do. Also, his backing of federal subsidies displays a clear misunderstanding of how a free-market works. These programs are doing far more harm than the good they purport to help.

Rep. Joyce’s votes in 2015 alone are absolutely unacceptable for anyone running re-election commercials calling himself an “Ohio conservative.” He voted for the re-authorization of the Ex-Im bank, the Bipartisan Budget Act of 2015, and the $1.1 trillion omnibus spending bill this past December. That’s being conservative Congressman???

Ohio’s 14th Congressional District is a product of the gerrymandering which occurred after the 2010 Census. This district is an eclectic mix of members of the political ruling class in the northeastern counties, working-class workers from Cuyahoga County, and conservatives in the northern half of Summit County. The conventional wisdom is that only a moderate from either party is capable of winning in this environment. We reject this notion and are anxious to see a true conservative rise up and prove the conventional wisdom wrong.