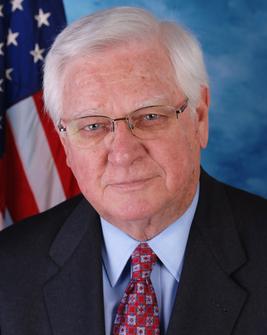 ​Congressman Harold “Hal” Rogers from Kentucky’s 5th Congressional District is the personification of the caricature which has long been associated with the American politician who has been in office too long, has too much power, and wields it without any regard to the consequences. He was even given the dubious nickname “Prince of Pork” by his home-town newspaper The Lexington Herald-Leader. Few subjects in modern politics can unite conservative and progressive causes but Hal Rogers is one of those exceptions. He is routinely given low scores for his record by groups that represent both sides of the political spectrum. Conservative First is no exception, which is why we have added Congressman Rogers to our 2022 U.S.House Target List.

Rep. Rogers was chairman of the powerful Appropriations Committee which gave him access to the nation’s purse strings, but it also made him a target for deal-making by his fellow congressmen looking for pork for their own pet projects. Although most citizens recognize that the duty of the Congress is for members to bring dollars to their districts, the common view is that most in Washington abuse this role far too often. The problem with Rogers is that when he brings home the dollars, he often does it at the expense of a district where the money can be spent far more productively. A 2006 New York Times article detailed how funds that were to be spent on “creating a tamperproof identification card for airport, rail and maritime workers” were actually diverted to Rogers’ district, which jeopardized the project.

The Congressman's voting record, as you can imagine, is terrible as he votes consistently with the establishment and/or the liberal Left. In 2015, he voted to re-authorize the Ex-Im bank (crony capitalism), the Bipartisan Budget Act of 2015 (more spending, debt limit suspended), and the $1.1 trillion dollar omnibus spending bill (​more spending, increased federal deficit).

Hal Rogers represents the worst in an elected official. He has been in the Congress for over 30 years, long out-serving his usefulness. His closed-door glad-handing and deal-making are costing the American taxpayer millions, if not billions, of dollars every year. Conservative First will be scouting the Kentucky landscape for a conservative to come forth and take back the Fifth Congressional District and represent the good people of the Blue Grass State.