​Conservative First has once again identified an elected official for our 2022 Target List and this time it is a member of Congress who has a penchant for presenting themselves as a “conservative”, but ultimately is nothing of the kind.

The GOP in New York was quick to support Elise Stefanik because if elected, she would be one of two things the party desperately feels they need in Congress: a young female. In today’s world of identity politics, having a young female candidate running for office is an appealing token for the party, so endorsements were delivered with great enthusiasm.

Representative Elise Stefanik was elected by the citizens of New York’s 21st Congressional District in 2014 by appealing to the voters with her tough talk on a monstrous federal government and its appalling tax system which hampers growth for individuals as well as small businesses.

Unfortunately, like so many before her, Rep. Elise Stefanik has gone back on her pledge to help reduce the size and scope of the federal government and is now a serial offender for voting to increase spending and entitlements. For example, she voted with House liberals to keep language in the defense budget to fund a study on how “climate change” affects our military readiness. What a waste of money!

Another broken campaign promise occurred last month when Rep. Stefanik voted with Speaker Paul Ryan and the House establishment for the Bipartisan Budget Act of 2018 which is fiscally irresponsible, utterly wasteful, and increased spending by $342 billion over 10 years. So much for that tough talk on a monstrous federal government!

For instance, when it comes to voting for a conservative-backed piece of legislation, Rep. Stefanik voted against last December’s Tax Cuts and Jobs Act, and while we had a few issues with this law, overall it was desperately needed in order to unleash our economy by creating jobs and giving the people back more of their hard-earned money. The bill lowered the corporate tax rate to 21%, nearly doubled the standard deduction for personal taxes to $24,000, and eliminated the Obamacare individual mandate and Rep. Stefanik and several of her New York colleagues were on the wrong side of the roll call.

When our research team analyzed the data and metrics of how conservative a member of Congress is, Rep. Stefanik finished nearly dead last. The citizens of New York’s 21st Congressional District can do much, much better.

Conservative First takes no pleasure in highlighting the broken promises of elected officials, however it is our mission to do so, and to encourage candidates who are conservative first to rise up and take their place. Representative Elise Stefanik is just another in a long line of politicians who campaign as a conservative only to show their true colors once sworn into office. 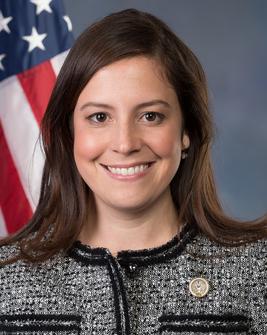